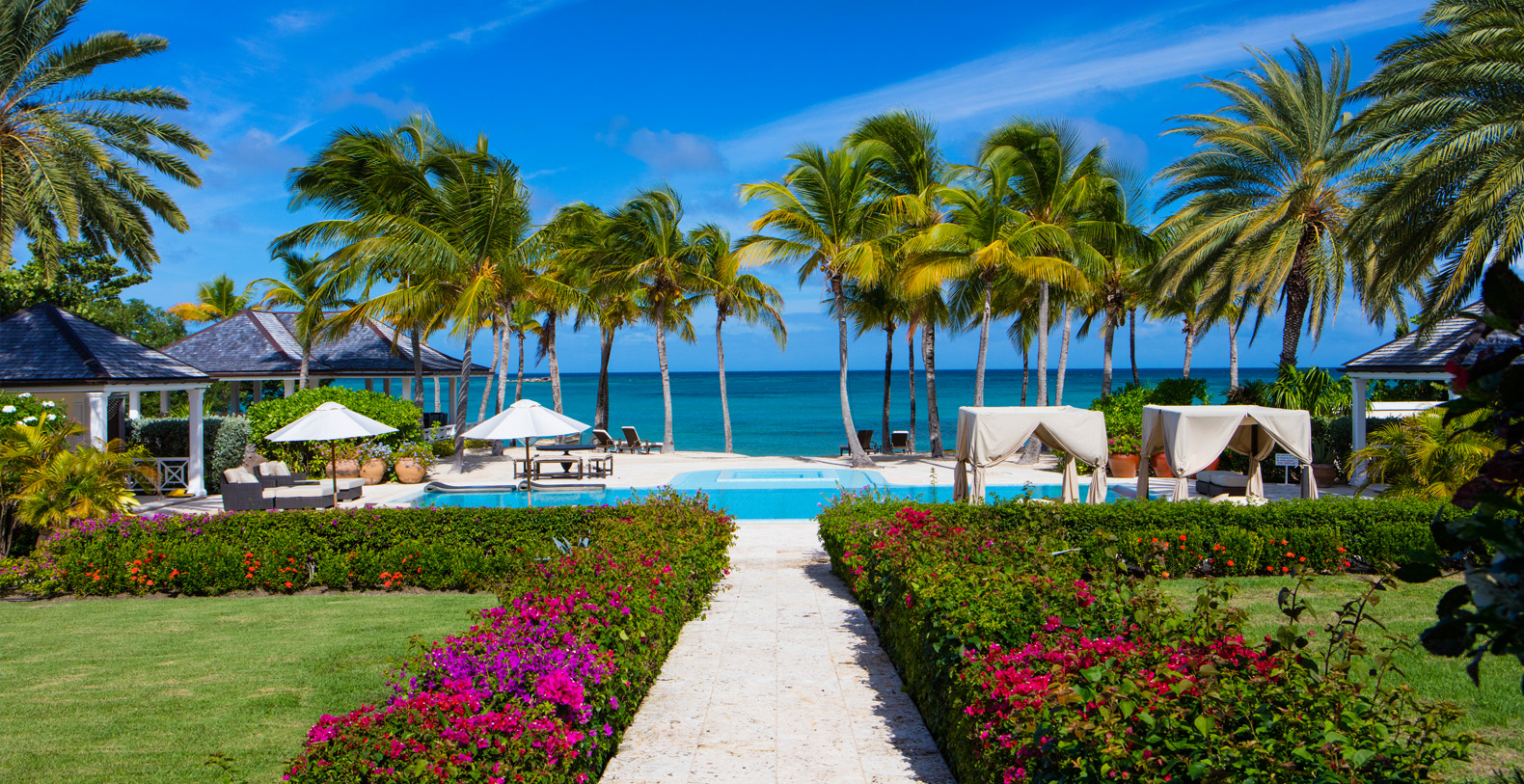 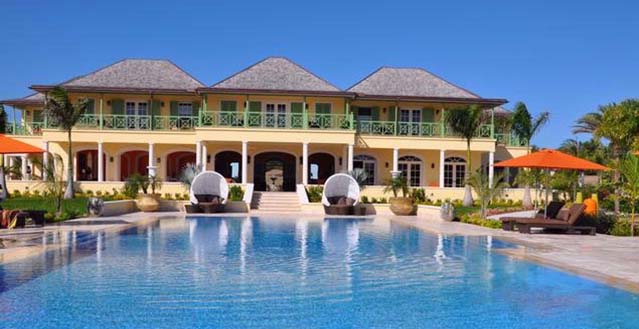 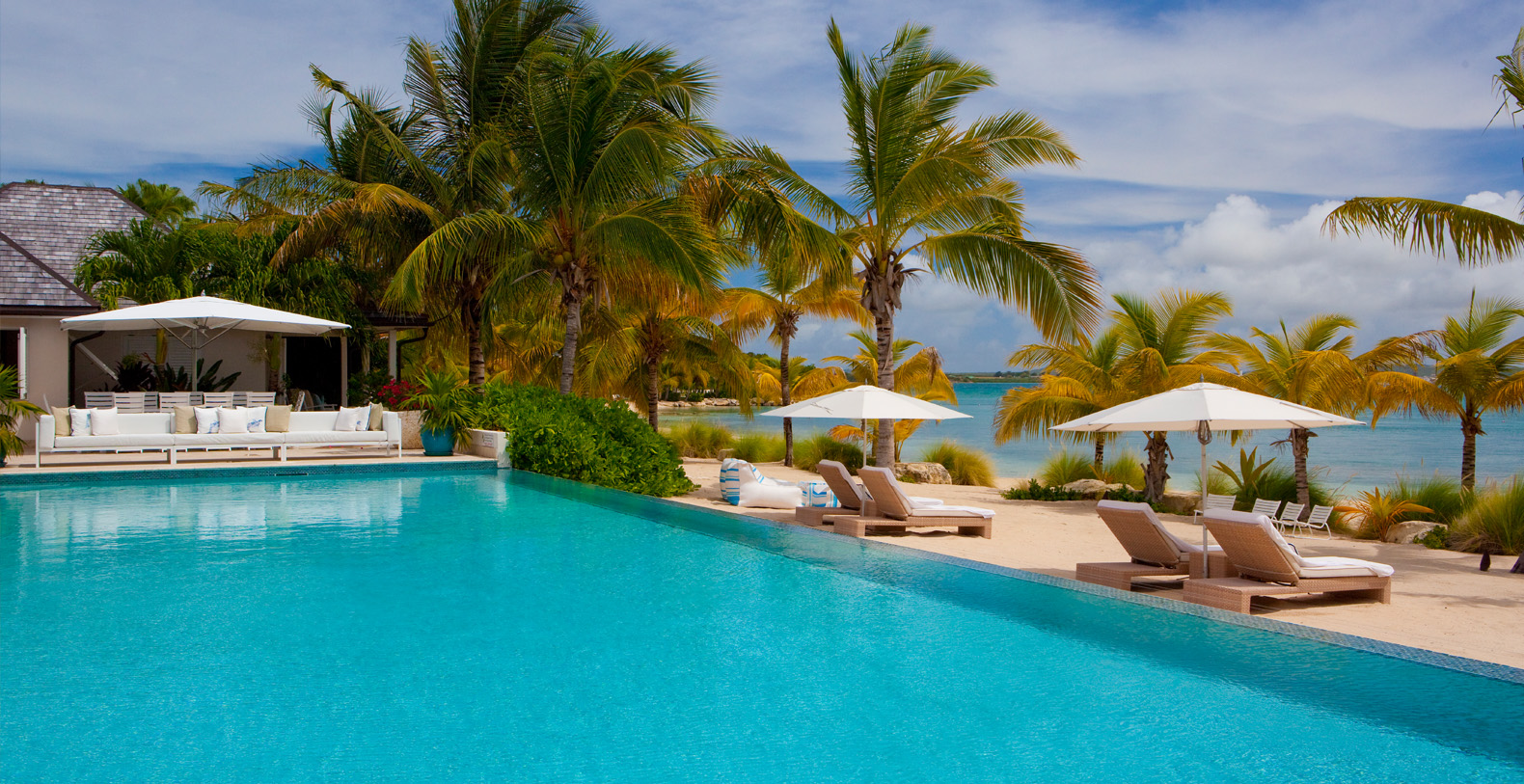 Touching down in Antigua, guests are whisked away on a short private cruise to Long Island, home of the tropical haven of Jumby Bay, where sun-kissed days are enjoyed basking on one of the world's finest beaches. This corner of the Caribbean, where pure white sands embrace crystal clear waters, is also home to rare Spanish sheep, beautiful birds such as the white egret and blue pelican, nurse sharks, eagle rays and brilliant reef fish.

Guests arrive into Antigua at the V.C. Bird International Airport located on the northeast corner of Antigua. There are many direct flights from North America and Europe as well as connecting flights via San Juan and St. Maarten. Charter flights are also available to the neighboring islands.

Transfers: Jumby Bay provides transfers between the mainland airport and the resort. Upon arrival, a chauffeured private town car conveys guests on a three-minute drive to the resort's dock where they receive a warm Jumby Bay welcome from a resort representative. From this point guests needn't lift a finger - their baggage will be waiting for them in their guest room, suite, villa or estate home. With cool scented towels proffered by staff, guests can take a moment to refresh themselves after their journey and begin to unwind. Two experienced crew members will assist guests onto the resort's private catamaran for a seven-minute ride over to Jumby Bay through clear Caribbean waters.

Adults: $60 per person, roundtrip
Children 2-12 years old: $30 per child, roundtrip (for children under 2 years old the transfer is complimentary) Airport transfer fees for guests arriving via private plane are available upon request.

Local Currency: Both the US Dollar (US$) and the Eastern Caribbean Dollar (EC$) are accepted on Antigua and nearby islands.

Immigration: Proof of citizenship and a ticket for onward destination is required for a visit. Check with the consulate or embassy in your home country for valid identifications, visas and other entry requirements. Australian, New Zealand, Japanese and EC Citizens: A valid passport for at least six months beyond the intended date of departure for visits up to six months. U.S. Citizens: A valid passport is required.

Customs: The following items may be taken into Antigua without payment of customs duty: 200 cigarettes or 50 cigars or 250 grams of tobacco and one liter of wine or spirits. Weapons and non-prescribed drugs are prohibited.

Departure Tax: A US$28 is assessed at V.C. Bird International Airport upon departure from Antigua.

Climate: Jumby Bay has one of the most wonderful climates in the Caribbean. Little rainfall and warm tropical breezes and trade winds and an average temperate of about 81°F make Jumby Bay a true paradise.

Traveling Around Antigua: Rental cars are abundant throughout Antigua. You will need a valid national license and a local license. A local license may be obtained at a police station for a nominal charge of US$20. Be aware that driving is on the left-hand side and most of the island roadways are not paved. Antigua's roads are notorious for potholes and poor signage and shoulders. Antigua's bus transportation can be quite an adventure. Travel by bus only if you don't mind erratic bus schedules and limited destinations. Taxis are the easiest way to venture around Antigua and all taxi drivers are qualified tour guides. For the adventuresome traveler, consider renting a motorcycle or mountain bike to see the island.

Area Attactions
Archaeological Site: On the northeastern corner of Jumby Bay Island lies an archaeological site of floor flints dating back 7000 years. Bat Cave: Located on the north side of English Harbor, Bat Cave is home to hundreds of bats hanging upside down from the ceiling. Local legend says that the cavern actually goes under the sea as far as Guadeloupe. You will need permission from the Medical School to visit Bat Cave.

Casino Night in Antigua: Join in the fun at casino night in St. John's. Located on English Harbor near the shopping village.

English Harbor: Once used as a base for the British Nave, English Harbor is home to Antigua's historic district. Features on the Harbor include Nelson's Dockyard National Park and many shops and restaurants.
Great Bird Island: A bird watcher's fantasy. Boat over to this tiny uninhabited islet and see the nesting grounds of the red-billed tropic bird. From April to September the laughing gulls, purple martins, terns, and brown noodles grace the island.

Green Castle Hill: Starting at the brick factory, climb this one-hour, not-so-easy trek to Green Castle Hill to see the most spectacular three-way view of Antigua. Rock formations rise up to 180 meters and are thought to be prehistoric megaliths.

Hiking: There are numerous hiking trails throughout Antigua. The following are just a few: Wailing's Woodland; Old Road; Falmouth; and Rendezvous Bay. Jumby Bay has over 4 miles of hiking and walking trails.
Museum of Antigua & Barbuda: Housed in the colonial Court House, the Museum features displays on both the Arawak and colonial artifacts discovered through archaeological digs on both islands.
Nelson's Dockyard National Park: Just 11 miles outside of St. John's lies one of the biggest attractions in the eastern Caribbean, Nelson's Dockyard National Park. This beautifully restored Georgian naval dockyard was home to the British Fleet during the Napoleonic Wars.

Pasture Bay, Jumby Bay Island: From May to December, experience the rare sightings of the hawksbill sea turtle during their nesting season.

Shirley's Heights: East of English Harbor lies Shirley's Heights, named after the former Governor of the Leeward Islands in 1781, where a partially restored fortification of the island’s observation post still remains. Enjoy breathtaking views or stroll the grounds to see the Palladian arches, barracks and Victorian garden.

Shopping: Visit the colorful shops and local vendors in St. John's. Browse for some of Antigua's wonderful native products such as pottery, carvings or Antigua's rum. Visit Duty-free Heritage Quay or Redcliffe Quay for clothing, jewelry, local arts and crafts, Cuban cigars, and other luxury items.

Jumby Bay Wildlife
Nature abounds on Jumby Bay Island. During your stay with us, you may observe a variety of bird life, including our mascot, the White Egret, the playful Bananaquit and nature's marvel, the Blue Pelican. Pasture Bay Beach is one of the world's principal nesting sites for the endangered Hawksbill Sea Turtle (July through November). Jumby Bay homeowners have set aside prime beachfront to ensure the continued protection of the nesting site for the turtle whose ancestors have inhabited the area's waters since the Age of Dinosaurs. During November, the harmless Nurse Shark uses the shallow waters off Pasture Bay Beach as a mating ground, coming into shore just shy of the beach following age-old instincts. This, combined with the presence of Eagle Rays, schooling fish and an adundance of reef fish make the waters surrounding Jumby Bay a haven for snorkelers.

History
The earliest inhabitants of Jumby Bay Island were South American Indians, beginning with the Siboney who arrived here about 1775 BC. Most came to the island to mine flint, which was exported to other islands for the manufacture of primitive tools and weapons. Around 50 AD, the Arawaks arrived to Jumby Bay but were in turn displaced by the Caribs, an Indian tribe that continued to raid the island until 1674, at which time English settlers had replaced the Spaniards who colonized the island in the 1500s.

The first European to discover the island was Christopher Columbus, an Italian sailing under Spanish colors in 1493. King Charles I granted Jumby Bay Island to Earl of Carlisle, the first recorded owner in 1627. In 1835 a Mr. Jarvis (owner of Jumby Bay at that time) rented the island to emancipated slaves who grew provisions to sell on Antigua. In 1935 an heir to the property used Jumby Bay to raise sheep. These sheep were descendants from those brought to the island by Spanish settlers who lived on the island in the 16th Century. The wild sheep seen roaming on Jumby Bay today are descendants of those sheep.

Jumby Bay was uninhabited for more than four decades before work began in the 1980s. In 1983 Jumby Bay opened as a private resort. Rosewood Hotels & Resorts assumed management of the resort in April 2002.

Let Us Help You Save Time, Just Send One Email, We Will Do The Rest!